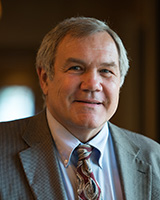 DeLisle started his real estate career as a consultant and developer, focusing on low income, elderly and student housing. After his initial industry activities, he returned to academia in the mid-70s where he earned his Ph.D. in real estate and urban land economics from the University of Wisconsin under the late James A. Graaskamp who built his reputation on real estate fundamentals and applied research. He also has an MS in marketing which has helped anchor his behavioral approach to real estate education and practice.

After a decade of academic activity, DeLisle joined Prudential Real Estate Investors in 1987 and helped establish the Investment Research Department. After several years he was recruited by Equitable Real Estate where he founded the Investment Research Department and rose to the level of Executive Vice President. After Lend Lease acquired the firm in 1997 he founded the Strategic Planning Department and served as Director before returning to academia in 1999.

DeLisle is widely published in both professional and academic journals. He was also the editor of the Journal of Shopping Center Research and has edited several books. He has authored the Financial Views series for the Appraisal Journal which has helped him stay current with industry conditions and emerging trends.

DeLisle has been active in a number of national associations and has worked to bridge the gap between the academic and industry sides of the real estate discipline. He is also the chair of the Real Estate Center Directors and Chairholder’s Association, an educational advocacy and service association and is a former President of the American Real Estate Society (ARES). In recognition of his industry leadership he was awarded the 2012 ICSC Research Award. He also received the 2010 Distinguished Service Award, the highest honor granted by ICSC. He has been a distinguished fellow for NAIOP for over a decade and serves on a number of industry and academic committees including NAIOPs Retail Advisory Committee and ICSC’s Academic Advisory Committee.