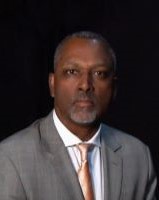 Gary O’Bannon joined the Bloch School in 2012, teaching master’s and undergraduate human resource management and leadership curriculums, after teaching assignments at the University of Kansas. After his retirement as the Director of Human Resources for the City of Kansas City, Missouri he began teaching full-time at the Bloch school in January 2020.

He holds an undergraduate degree in Communications and a Master of Arts in Human Resources Management, in addition to graduate certifications from both the Harvard and Michigan State University Schools of Negotiation. He has served as a visiting instructor at the George Washington University/Public Service School of Excellence in Washington, D.C. and the Maxwell School at Syracuse University in New York. He has published work on generational issues and been a frequent speaker at national, regional and local conferences.

Currently, Mr. O’Bannon moderates UMKC’s Critical Conversations, a community-facing webinar series created to addresses systemic racism. The goal of each panel discussion is to enlighten, educate and explore the causes and potential cures for racism, in addition to sharing actionable steps to improve racial interactions in the broader community. In addition, he is the creator and host of the Journey to Leadership video podcast series, featuring interviews with community leaders from the public, private and not-for-profit sectors. From 1984-2003, Mr. O’Bannon worked for various radio stations in the Kansas City area as a news anchor and reporter. From 1984-1998, he co-hosted Urban Affairs, a public-affairs show on KCTV-5, a CBS affiliate.

Mr. O’Bannon has been a recipient of the Award of Excellence from the National Public Employer Labor Relations Association, as well as the Local Administrator of the Year Award from the Greater Kansas City Chapter of American Society of Public Administrators. In 1994, The Kansas City Globe newspaper cited him as one of the 100 Most Influential African-Americans.