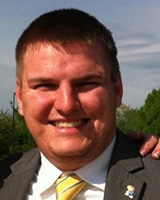 In 2017, Kevin graduated from the University of Kansas with a degree in Political Science and minors in History and Public Policy. During his undergraduate academic career, he completed several internships in the government and nonprofit sectors including a semester-long internship on Capitol Hill in Washington, D.C. In 2018, he worked as a field organizer and junior level staffer on a gubernatorial campaign in Kansas.

Currently, he is pursuing his Masters in Public Administration with an emphasis in Urban Policy and Administration at UMKC. After graduating with his MPA, Kevin hopes to one day work in city or county government.

In his free time, Kevin enjoys hiking and watching sports with his friends and family.