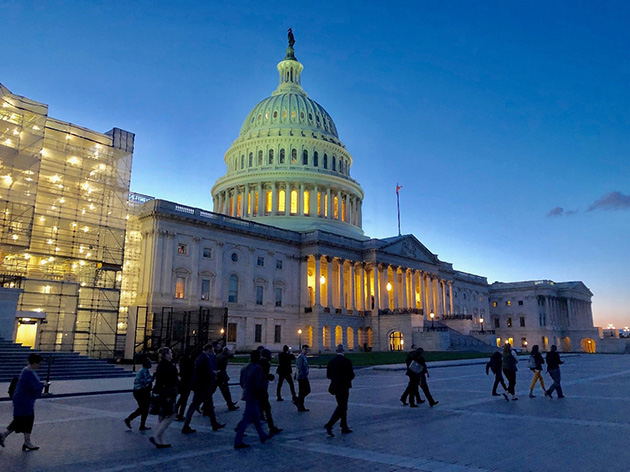 The Washington, D.C. Residency is the immersive experience marking the conclusion of the Bloch Executive MBA first year. Study in Washington, D.C. is an extension of the Public Policy and Industry course taken in the second semester of the program. Throughout the course, students are challenged to think strategically about external relations and how engagement with governmental actors is critical to the success of their companies. The Washington, D.C. component of the course exposes students to the federal government ecosystem, including all the private sector actors who are influential in the policy process.

Part of the value of being in D.C. is hearing directly from the people who enact policy. Our trip this year began with former Texas Congressman Martin Frost. Representative Frost escorted students to the House chamber floor where the State of the Union is given each year. While on the House floor (and during the subsequent tour of the Capital), Rep. Frost provided an insider’s view of how policy gets made. Rep. Frost was a sponsor of the bill creating Amber Alerts and he explained that his success on that legislation was aided by his seniority at the time.

The next day students met with a panel of lobbyists and then with Ron Eidshaug, Vice President of Congressional and Public Affairs at the U.S. Chamber of Commerce. Both the panel of lobbyists and Mr. Eidshaug discussed how companies can position themselves with legislatures to either limit the impacts of harmful legislation or promote beneficial legislation. The day concluded with freshman Congresswoman Representative Sharice Davids who offered the class her perspectives as a new member of Congress, her goals, and her assessment of the culture of Capitol Hill.

On day three, the class spent the afternoon with pollster Robert Blizzard of Public Opinion Strategies. During the session, the class was given a crash course on issue and electoral polling. Mr. Blizzard helped clarify the strengths of polling operations, utility for companies, and limitations.

The final day of the residency was spent at the Brookings Institute, a public policy think tank. While at Brookings, the students discussed the role of think tanks in the policy process. They were also privileged to participate in an economics simulation completed by the majority of Congressional staffers. The simulation allowed students to weigh policy benefits against financial costs. It also gave an insider’s view on trainings legislative staff receive to be successful resources for elected officials.

Our final stop as a class was at the Australian Embassy as these students will be heading to Australia next year to complete their International Residency. To promote continuity between year one and year two of the program, students met with Embassy officers to discuss business relationships between Australia and the United States. With only 21 months to complete the program, our students waste no time as they transition to their final year of the program.

The Washington, D.C. Residency provides students a first person account of federal legislative operations – but that is only half of the value. While in D.C. student teams are also working on policy research projects and each student completes a written and oral legislative testimony. This year’s projects focused on the environment, immigration, education and the gig economy. Teams were given significant blocks of time on days two and three to conduct interviews with experts on their topics. This trip, interviews conducted by teams included the CATO institute, Sen. Chuck Grassley’s office, Rep. Sharice Davids office, Sen. Roy Blunts office.

We look forward to next year when another group of Bloch Executive MBA students hone their skills to become better strategists!